PART I: ON PLASTIC

How Did We Get Here?

Some of us “older residents” remember the scene in the 1967 classic movie The Graduate, where one of guests advises the young Dustin Hoffman that the future will be. One word: Plastics.  We all laughed at that, but now as this “wonder product” strangles our world, it’s a harder joke to swallow.  How did plastic packaging take over the world?

It started with a desire from some for a harder-to-break bottle to hold regular stuff like  shampoos, milk, and the like.  The oil refining industry latched on to this irksome issue with glass bottles or ceramic bottles and made the case for safety and convenience.

Then slowly, over the oncoming decades, everything became plastic. We didn’t worry because we could recycle these containers, and as more and more products came in plastic, it completely normalized.  We didn’t care—or didn’t think to question—where our containers went, as long as they went “somewhere”. 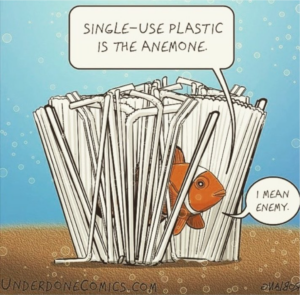 This twin misconception, first, that the majority of plastic put in our curbside bin is actually recycled, and second, that somebody is putting it all to good us somehow added to the problem. If it’s not a problem, why worry about curbing our consumption of the thing? Soon enough, water bottles became the go-to beverage, packaged vegetables and meat were our only choices; and polystyrene (aka Styrofoam) packaging, food trays, cups, were pervasive and often unavoidable in daily living.

Let’s focus in one of plastic’s most infamous forms—the single-use plastic bag:

Not only do single use plastic bags add to the non-degradable portion of our landfills, they are also often discarded in our natural environment, polluting the land, rivers, and ocean. Along with other kinds of thin and flexible plastic, they clog our storm drains and wreak havoc on recycling machines — frequently getting tangled and causing delays. Plastic pollution is only the beginning of the problem. Leeching of toxic chemicals from plastic can occur in all environments, but marine life is especially vulnerable to accidental consumption of plastic. Sea turtles are notorious for mistaking suspended plastic bags for jellyfish, which they eat. We have all seen the horrifying pictures of fish, seabirds, turtles, and even other lager marine mammals like dolphins and whales … You can read more about why and how this occurs here.

This isn’t just a problem for marine life: we commonly consume many of these now-contaminated animas. Death by plastic and death by overfishing are the greatest threats facing marine life today. Combined, these twin threats critically endanger some species.

Despite the issues surrounding plastic, we continue to produce lots and lots of it. For many years now, it has been nigh impossible to completely avoid plastic in daily living. With society’s rising environmental conscience, hopefully we are on our way to living (again!) in a plastic-free world. In the meanwhile, reducing plastic consumption both through individual choice and regulative action is a fine place to start.

Ridgewood joined over 80 towns in NJ in passing a ban on single use plastic bags.  Many US States, as well as entire countries (e.g. Chile, Scotland, Italy, Netherlands), have banned single use bags. In November, Gov Murphy signed S864 which states:

Starting May 2022, both plastic and paper single-use bags, as well as disposable food containers and cups made out of polystyrene foam, will be banned. Paper bags require resources and energy to produce, contributing to pollution. Moving forward, the focus throughout the state will be on using reusable bags. The following products will be exempt for an additional two years after May 2022:

Under the new law, food service businesses will be allowed to provide single-use plastic straws only upon request starting November 2021.

Most of us are used to the bags to line our trash cans, clean litter boxes, etc.  We seem to forget that these bags only came into mass use during the two decades.

And we have forgotten that there are alternatives: reusable bags, less packaging,  biodegradable trash liners and dog waste bags.  But this is an ongoing problem with everything:  once we get used to a convenience, as long as we don’t see any of the byproduct, we’re happy.  There is no getting back a plastic-filled whale from the dead, but we do have a chance to save future creatures.  We have to think of our children’s and grandchildren’s generations who will never see a clean ocean free of plastic debris.

The pandemic has presented the plastics industry with a growth opportunity, and it has been hard at work trying to regain business they lost during the bans. One example is the peddling of the claim that paper bags were harboring dangerous germs (as opposed to single-use plastic). In reality, both may carry germs if coughed and sneezed upon, and the supposed protection given by single-use plastic was not significant enough to revoke plastic bans. You can read more about the issue in this NYT article from early in the pandemic. Many supermarkets, including our own Stop and Shop defied the plastic ban in the beginning and started using single use bags. While the claim by the plastic industry was baseless, it was fearmongering and by the time the facts were distributed, many people had gone back to single use bags, and have continued using them. Furthermore, for the time being at least, plastic bans have been weakened or eradicated.

Of course, it makes sense that the plastic bag industry fought back in this case; increasing profits is the singular mandate of traditional business.  Nevertheless, the mandate for government is to guarantee our well-being and protect our environment, while balancing the concerns of both business and citizens.